In addition to earning dual doctoral degrees—a PharmD as well as a PhD with extensive training in pharmacokinetics—Minoli Perera trained as a fellow in clinical pharmacology and pharmacogenomics. Pharmacogenomics is a translation field requiring skills in both basic science and clinical medicine. 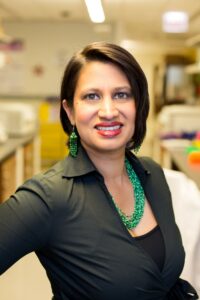 During a two-year clinical fellowship, Perera trained in a human genetics laboratory studying novel variants related to pharmacokinetic differences in CYP3A4 in African Americans. This training, which integrated Perera’s clinical and basic science backgrounds, highlighted the complexities of genetic studies in admixed populations such as African Americans. Perera was initially interested in clinical translation of pharmacogenetic findings, but soon realized that African Americans are often excluded from these studies. She has been funded by both the National Heart, Lung, and Blood Institute and American Heart Association to investigate novel genetic variants associated with warfarin dose response. She has also expanded her interest in drug metabolism and its role in pharmacogenomics in her previously awarded Research Project Grant (R01) with the National Institute on Minority Health and Health Disparities (NIMHD) to investigate genetic variation in drug-metabolizing enzymes in African Americans. This work spans all pharmacologic areas and has allowed for a more in-depth understanding of how these important genes are regulated. Perera is currently Prinicpal Investigator for one of five Transdisciplinary Collaborative Centers funded through the NIMHD. Dubbed ACCOuNT (African American pharmacogenomic Cardiovascular CONsorTium), it will work to accelerate the discovery and translation of pharmacogenomic findings in African-ancestry populations.

Racial minorities have been consistently excluded from most genomic studies, and their data compose only a small fraction of what is publicly available. These studies and data, however, are key to the translations and implementation of precision medicine. To address this growing health disparity in precision medicine, we use not only genomics, but also other high-complexity datasets (e.g., transcriptomics) to discover the genomic predictors of drug responses, as well as the biological underpinnings that drive genetic associations. Our work finds important associations of African-American–specific SNPs in pharmacogenomics, and also novel genes that contribute to drug response, disease, and adverse events. These types of studies shed light on the unique contributions the African-American genome can make to precision medicine and the critical need for greater diversity in genomic medicine.