Talk with researchers involved with Precision Health at the University of Michigan and the same sense of purpose emerges: to use intelligence about our individual make-up, in combination with data about our health experience and habits, to speed scientific discoveries that will impact personal health.

Translated, they hope to use the information from our health, environment and genes — all amassed in a relatively short time — to better target drugs and other therapies to prevent and manage disease.

And they want to do it in a way that is smart, coordinated, collaborative and cost-effective.

If you want to know how quickly technology has changed the way scientists understand health and disease just ask Goncalo Abecasis, D. Phil., about sequencing the human genome. 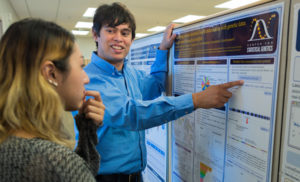 The chair of the Department of Biostatistics at the U-M School of Public Health and co-director of Precision Health at U-M has been witness to all of it, and has been a major participant in global work to advance genetic science.

When Abecasis was a doctoral student in the late 1990s, scientists were just wrapping up the first full sequence of the human genome, a 13-year endeavor at the cost of $3 billion dollars. Working in a wet lab at the Wellcome Trust Center at Oxford University in England, he quickly became frustrated with the tools that were available to decode genomes.

The student who always loved biology also had an affinity for computer programming and had paid his way through college developing software. So he convinced his faculty mentor that he could create better tools for DNA analysis — and he did.

Those tools and techniques, and several developed since, have enabled a number of major international genetic research projects, including the International Haplotype Map Project and the 1000 Genomes Project. The latter started a few years after Abecasis’ college days, when about 10 human genomes had been sequenced, and set out to gather and sequence 1,000 people through an international effort to catalogue human genetic variation. In the end, the team sequenced the DNA of 2,500 individuals.

Fast forward to today and Abecasis rather humbly acknowledges that his software and tools, many developed in the 16 years he’s been at Michigan, had at last count shown up in more than 100,000 research citations on Google.

“We used to keep track but it gets hard, and these things get viral,” he said.

“Every year we get about four times more data than the year before, so there is continual need to figure out what are better computational tools, what are better methods to analyze, share and interpret data,” he says. “As data accumulates, questions that seemed extremely hard before become possible, and easier. Then you end up with more, newer and even harder questions.”

The cost of the work also has gone down significantly. Genome sequencing and analysis expenditures today are about $1,000–$2,000.

Shortly after President Barack Obama announced a national Precision Medicine Initiative in January 2015, the National Institutes of Health funded several projects. The U-M School of Public Health, with Abecasis as principal investigator, was named one of four sub-awardees to work with the Data and Research Support Center at Vanderbilt University to mine and organize data, and create the tools to analyze it.

U-M’s task is to support the development of genome analysis tools, which will include adapting some of the tools already developed by Abecasis and colleagues.

“Now that we can generate data for tens of thousands or hundreds of thousands of people, the next challenge is how to make sure enough patients, enough volunteers, are available for research,” Abecasis said.

That’s the idea behind his founding of Genes for Good, a public data bank of genetic and health information, which to date has enrolled more than 65,000 individuals across the country. If funding is available to sustain growth at the current rate Abecasis said the program could reach a million users in less than two years. 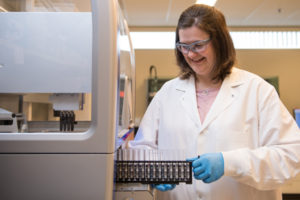 The social media-based program invites participants to share health information and in return they get summaries of their health data and a comparison with other participants. Those that supply the most complete information are sent a spit kit for a sample that can yield an ancestry report for the participant and valuable data for scientists. They also get a free genetic profile to share as they wish.

Gathering volunteers for genetic research is also at the heart of the Michigan Genomics Initiative (MGI), founded by Abecasis, Sachin Kheterpal, M.D., M.B.A. and Chad Brummett, M.D., an associate professor in the U-M Medical School.

MGI was established in 2010 to combine patient information from electronic health records, blood samples and self-reported questionnaires. Patients who come to Michigan Medicine for surgical or diagnostic procedures are invited to share their electronic health data and donate a blood sample.

In addition to his campus leadership role in Precision Health, Kheterpal served on the NIH working group that established the national initiative that became known as the All of Us Research Program. He is principal investigator of the Multicenter Perioperative Outcomes Group, which he formed, and is a health IT researcher with particular interest in electronic health records.

Michigan Medicine spends billions of dollars treating and monitoring patients. Kheterpal’s career has been focused on making the resulting data and records available for research, with a focus on improving and understanding care better.

As Abecasis, Kheterpal and Brummett were starting MGI, the U-M Office of Research identified a central repository for biospecimens as an essential resource that could be shared by researchers across campus.

In 2013, Victoria Blanc, Ph.D., was hired to set up the 4,200-square-foot University of Michigan Central Biorepository on North Campus, that after four years boasts more than 370,000 blood, urine, tissue and other specimens to support research in precision health and molecular medicine. 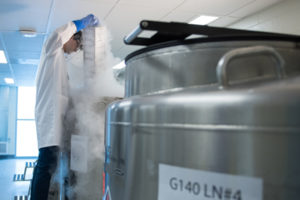 Nearly 50,000 of the specimens are the blood and DNA samples from patients that donated to MGI, and which are already used by 30 researchers across campus.

Cryogenic and Minus 80 freezers with multiple power backups and 24-hour monitoring store samples used in research on mental health; cancer of the head, neck and skin; cardiovascular, kidney, inflammatory bowel and lung disease; and metabolic disorders.

“Understanding the difference between you and me from a precision health perspective comes down to the information contained in our biospecimens,” said Blanc, director of the biorepository.

Blanc said there are many good reasons researchers should take advantage of the biorepository and MGI, including the elimination of duplicate work in local labs, more effective utilization of gathered samples, having a unified approach to management of the regulatory environment and cost savings.

Perhaps most important to researchers is the issue of speed. Having ready samples can cut months or years off the research process by eliminating or reducing time spent in subject recruitment.

Bhramar Mukherjee, Ph.D., associate chair of biostatistics, the John D. Kalbfleisch Collegiate Professor of Biostatistics and the associate director for Cancer Control and Population Sciences at the Comprehensive Cancer Center, researches the associations between genetics, the environment and cancer. She has found a wealth of information in MGI data, noting that 46 percent of patients supplying samples have some abnormal tissue that may be cancerous, since cancer patients undergo surgery and diagnostic procedures more frequently than others and prefer to come to large academic medical centers for their care.

“The genes included in the genetic risk scores we constructed for each cancer in a recent study based on MGI have been discovered using very expensive large studies across the world and are reported in a publicly available GWAS (genome-wide association study) catalog,” Mukherjee said. “We observed striking reproducibility and correspondence of the results in MGI with those reported in very large and robust meta-analysis.

“Existence of MGI has given new energy and ideas to my research program and more broadly to the research community in health sciences at U-M.” 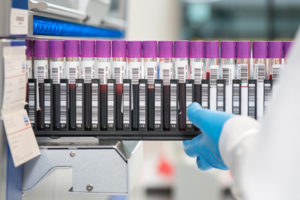 “If we’d had to recruit our own controls, we would have only been able to collect half as many cases over the past few years, severely depleting the power of our genetic studies,” Willer said.

“The previous model of collecting samples, and studying only one disease using those samples was not very efficient. The biobank model that MGI uses is much more scientifically powerful and cost-efficient because we can pay once for genotyping all samples, then analyze hundreds or even thousands of diseases,” she says.

One Size Does Not Fit All

Michael Boehnke, Ph.D., in the School of Public Health has been involved in multiple genetic studies of diabetes, bipolar disorder and schizophrenia.

One of his team’s studies in 2007 discovered nine places in the genome that influence risk of type 2 diabetes. That number increased to more than 100 a year ago, and he expects the team to announce nearly twice as many in the next year.

Prior to in-depth genetic studies, scientists and drug companies largely had to guess the genes, or the disruptions in those genes, that were responsible for disease, Boehnke said. As a result, developing drugs and other therapies generally focused on a one-size-fits-all approach to treatment.

“Therapies based on genetic information can be substantially cheaper to develop because they are more likely to be effective,” said Boehnke, the Richard G. Cornell Distinguished University Professor of Biostatistics and director of the Center for Statistical Genetics and of the Genome Science Training Program.

“We don’t try to give everyone the same shoe. We try to get a shoe that fits the person. In the same sort of way, if we can choose therapies or choose preventive measures, or make decisions based on each individual’s behavior and genome, it makes better sense.”

Abecasis said U-M has many related efforts that use genetic, environmental and health data to understand disease that can be united under Precision Health.

The promise: “We’ll be able to understand disease and biology better, which will help us build better interventions and better medicines, but also be able to tailor what we do for each person.”