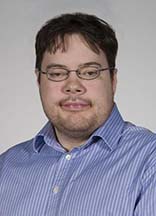 In 2019, Matthew Patrick, MEng, PhD—a research investigator in dermatology with degrees in software engineering and computer science—received a Precision Health Scholars Award. With this award, Matthew planned to research “Risk Assessment and Optimal Treatment Prediction for Patients with Psoriasis and Type 2 Diabetes.” Two years later, this work has resulted in several papers and presentations, and provided Matthew the opportunity to study COVID risk among people with conditions such as psoriasis, as well as other psoriasis comorbidities. This spring, Matthew received a Dermatology Foundation Research Career Development Award  to research shared genetic risk factors for psoriasis and multiple sclerosis. Read his summaries of his research, publications, and grant below.

Project Summary
Psoriasis and type 2 diabetes (T2D) often co-occur (~1.5 Odds Ratio) and both diseases have a substantial impact on health, yet genetic studies comparing the diseases are currently limited. We conducted a trans-disease meta-analysis (TDMA) between psoriasis and T2D, identifying four shared genetic loci that are more significant in TDMA than either individual trait. Evidence from protein-protein interaction and other molecular resources suggests these four loci are involved in NF-κB signaling, and we applied Mendelian randomization to assess the causal relationship between psoriasis and T2D, demonstrating that there are shared genetic components between the two diseases. Our project also addressed the treatment of psoriasis patients who have T2D and other comorbidities, using an advanced machine learning pipeline along with diverse datasets to predict potential DDIs, and validated them in large-scale electronic health records from Michigan Medicine. By using psoriasis and T2D as example diseases, our results provide insight into the immunological components that connect immune-mediated skin conditions and metabolic diseases, independent of confounding factors.

The Precision Health Scholars Award has contributed significantly toward my ultimate goal of enhancing precision health for complex conditions and informing the optimal treatment of psoriasis patients with different immune-mediated comorbidities.

Psoriasis affects more than 7 million adults in the US and can cause severe pain and itching, with a high impact on the cost of healthcare. The comorbidities of psoriasis, however, exceed more than half its direct healthcare costs, with a particularly high incidence of T2D (the seventh leading cause of death in the US) compared to patients with other immune-mediated diseases. T2D was among the first psoriasis comorbidities identified; psoriasis patients exhibit reduced incretin effect (indicative of prediabetes), and the higher the severity of psoriasis (body surface area), the greater the risk. We hypothesized that by integrating health record data with genetic profiles of patients who have T2D and/or psoriasis, we can enhance the identification of genetic risk factors and their associated pathways that are shared by or unique to each disease, thus improving precision health care for individuals suffering from psoriasis and/or T2D.

By integrating genetic profiles from recent large-scale genome-wide association studies (GWAS) with epidemiological data from genotyped University of Michigan health records, we performed TDMA to identify four significant shared loci between psoriasis and T2D and confirmed the results with the Michigan Genomics Initiative (MGI). Interestingly, proteins encoded by genes from each of the four loci (ACTR2, ERLIN1, TRMT112, and BECN1) were found to be involved in protein-protein interaction, with TRAF6 as the hub protein (enrichment p=1.3×10-6). TRAF6 mediates NF-κB expression and has previously been implicated in the development of both psoriasis and T2D. We further confirmed the candidate genes using eQTLs, differential expression and promoter capture Hi-C, as well as interpreting the genetic signals with chromatin marks for active enhancers. We then investigated the effectiveness of different treatments for patients who have comorbid psoriasis and T2D, with respective to potential drug-drug interactions. In addition to identifying drugs used to treat psoriasis that could interact with drugs for treating T2D, and vice versa, we extended our analysis to include 20 other psoriasis comorbidities.

Not only did our team produce two publications and three presentations directly related to this project, the research also resulted in tools and resources that allowed us to address the risk of COVID-19 among patients with inflammatory skin conditions, and led to a Dermatology Foundation Research Career Development Award to investigate the relationship between psoriasis and multiple sclerosis. The Precision Health Scholars Award has contributed significantly toward my ultimate goal of enhancing precision health for complex conditions and informing the optimal treatment of psoriasis patients with different immune-mediated comorbidities.

Summary of aims and outcomes/status
Aim 1. To predict the risk of type 2 diabetes among patients who have psoriasis, and vice versa.
To address this aim, we applied TDMA to 8,016,731 well-imputed genetic markers from large-scale meta-analyses of psoriasis (11,024 cases and 16,336 controls) and T2D adjusted for BMI (74,124 cases and 824,006 controls). Our approach revealed four genome-wide significant loci (p<5×10-8) that were more significant in TDMA than either individual trait. Furthermore, we confirmed that the shared directions of effect between psoriasis and T2D were not present in a recent GWAS for BMI (806,834 individuals), and we applied colocalization analysis to ensure the shared loci we identified had consistent linkage disequilibrium patterns between psoriasis and T2D. In separate genotyped health record data from the Michigan Genetics Initiative (42,112 patients), we evaluated the risk allele frequencies (RAF) for the lead marker at each of the four loci and confirmed they were indeed higher (8% on average) for patients with both diseases than controls, suggesting our approach to be successful in identifying reproducible shared risk alleles.

We further investigated the risk of psoriasis patients developing T2D and other comorbidities by training a 524-marker polygenic risk score (PRS) for psoriasis using PRSice-2 on a subset of our GWAS (7,161 cases and 12,309 controls). The remaining psoriasis cohort (3,863 cases and 4,027 controls) was held out for model selection. The resulting PRS was then applied to data from 32,309 patients in MGI through the use of a logistic regression model, adjusting for age, gender, BMI, race and socioeconomic disadvantage, in addition to the number of psoriasis diagnostic codes (as a surrogate for symptom severity and health system engagement). Although the psoriasis PRS was not significantly associated with T2D, it was nominally significant for coronary artery disease (OR=1.04, p=0.04) independent of the number of diagnostic codes (OR=1.05, p=7×10-4), suggesting a shared genetic risk. Furthermore, when we applied our TDMA approach to GWAS summary statistics for psoriasis and coronary artery disease, we identified a significant shared signal in high linkage disequilibrium with a missense variant for IFIH1, a protein coding gene that is associated with Singleton-Merten syndrome: a rare genetic disease that causes early arterial calcification.

Aim 2. To identify effective drugs for treating patients who have both diseases.
A key issue for the effectiveness of drugs is that patients who are prescribed different drugs for comorbid diseases may encounter DDIs. This is particularly important, as polypharmacy has increased among the general population in recent years. We therefore focused on predicting potential DDIs among patients who have psoriasis and different comorbidities. To achieve this, we introduced a new computational approach that comprehensively assessed the drug pairs that may be involved in specific DDI types by combining information from large-scale gene expression (984 transcriptomic datasets), molecular structure (2,159 drugs), and medical claims (150 million patients). For example, our approach predicted that pramlintide (an anti-diabetic drug) can decrease gastrointestinal motility when taken with choline magnesium trisalicylate (an anti-inflammatory used for psoriasis, among other diseases), and indeed previous research indicates that pramlintide can delay gastric emptying. Our approach predicted that taking betamethasone (which is used to treat psoriasis) and metformin (used for T2D) together can result in increased glucose levels. By applying pairwise Wilcoxon tests to A1c test results for the same patients taking both or only one of the drugs in Michigan Medicine, we were able to validate this prediction (p=6.6×10-3, n=437). Similarly, simvastatin and betamethasone were predicted to increase myopathy when taken together, and performing a Fisher enrichment test using ICD-9/10 codes for myopathy, we found this to be the case (OR=2.63, p=5.85×10-69). Overall, our approach achieved over 0.9 area under the receiver operator curve (AUROC) for differentiating 11,861 known DDIs from 25,750 non-DDI drug pairs. With information from genomics and health records and advanced machine learning approaches, we predicted new DDIs that can potentially impact the effectiveness of treatments for patients with psoriasis and T2D.

My application to the Dermatology Foundation would not have been possible without the groundwork I was able to achieve through Precision Health.

We performed TDMA to identify significant shared loci between psoriasis and T2D. Using MGI data, we confirmed the effect alleles of the four shared genetic loci we identified, so they may be used as markers in a polygenic risk score. We also assessed the disease relationship using Mendelian randomization to establish a causal link.

This publication utilizes the tools and techniques developed through the Precision Health Scholars Award and applies them to a pressing need to understand the risk factors for COVID-19. Case reports from Turkey and the USA suggested psoriasis patients may be at higher risk of COVID-19, but we were the first to demonstrate a statistically significant relationship through epidemiological research and our innovative TDMA approach. While not one of the original aims of our project, we felt it was important to contribute the approach we had developed through our award, given the scale of impact from the COVID-19 pandemic. Our work has since been highlighted by the International Psoriasis Council and Dermatology Times.

Grant Funding
Dermatology Foundation Research Career Development Award ($55,000 annual)
Identification of shared genetic and modifiable risk factors for psoriasis and multiple sclerosis
This award builds on the tools and techniques developed with the Precision Health Scholars Award to investigate the relationship between psoriasis and multiple sclerosis. A clear understanding of comorbidities is important if we are to develop effective precision health strategies for psoriasis patients, since they have a large impact on individuals’ lives and reveal important details about their underlying inflammation. The Research Career Development Award will provide up to three years of funding and equip me to apply for subsequent awards from the NIH. My application to the Dermatology Foundation would not have been possible without the groundwork I was able to achieve through Precision Health.